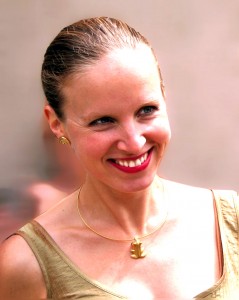 Of Swiss and Czech origin, Hélène Čajka McClellan studied in Geneva and in the Netherlands.

Initially studying violin as well as the baroque violin, she progressively dedicated herself to vocal music, first as a choir conductor. She then completely embraced solo singing and moved to the Netherlands where she stayed for three years supported by a grant from the André-François Marescotti Foundation. Returning to Switzerland, she studied with Ms. Marie-José d’Alboni with whom she completed her vocal studies.

Graduating as a choir conductor in the class of Michel Corboz, and as a music teacher at the Geneva Conservatory, she also graduated in singing and pedagogy at the Schweitzer Akademie für Musik und Musikpädagogisch.

Her careers develops in Switzerland, France, Thailand and Denmark where she is regularly invited to perform as a soloist, in particular with the ensemble “Copenhagen Soloists”.

Her tessitura and unique colour naturally suits the oratorio repertoire in which she often performs in works such as Bach’s B Minor Mass, Händel’s Messiah, Rossini’s Petite messe Solennelle, Schubert or Beethoven works.

Hélène regularly performs with orchestras repertoire such as A. Lokshin’s Symphony no 7, Karl Jenkin’s “Stabat Mater” and “The Bards of Wales”, or Brahms’ “Alt Rhapsodie”.

She has performed in various operas and lately in a new production in Neuchâtel (Switzerland), “Les Faiseuses d’Anges”, composed by Swiss composer Julien Monti and written by French writer Valérie Letellier. She has also been part of productions or Opera Siam in Bangkok and Grand Opera Thailand.

She has worked with various conductors in Switzerland and abroad including Luc Baghdassarian, Bernard Héritier, Pascal Crittin, Jonathan Griffith, Jonathan Ofir, and has sung in Switzerland in the cathedrals of Geneva, Lausanne and Sion, and at the Victoria Hall in Geneva. She has also performed during the Festival du Jura, the Radio Suisse Romande’s Schubertiade and with orchestras such as the Orchestre de Chambre de Genève (OCL), Lausanne Chamber Orchestra, Bienne’s Symphonic Orchestra, Lausanne’s Sinfonietta,  the Ensemble Baroque du Léman and Lausanne Camerata conducted by the famous French violinist Pierre Amoyal.

She regularly  gives recitals with pianist and conductor Luc Baghdassarian.